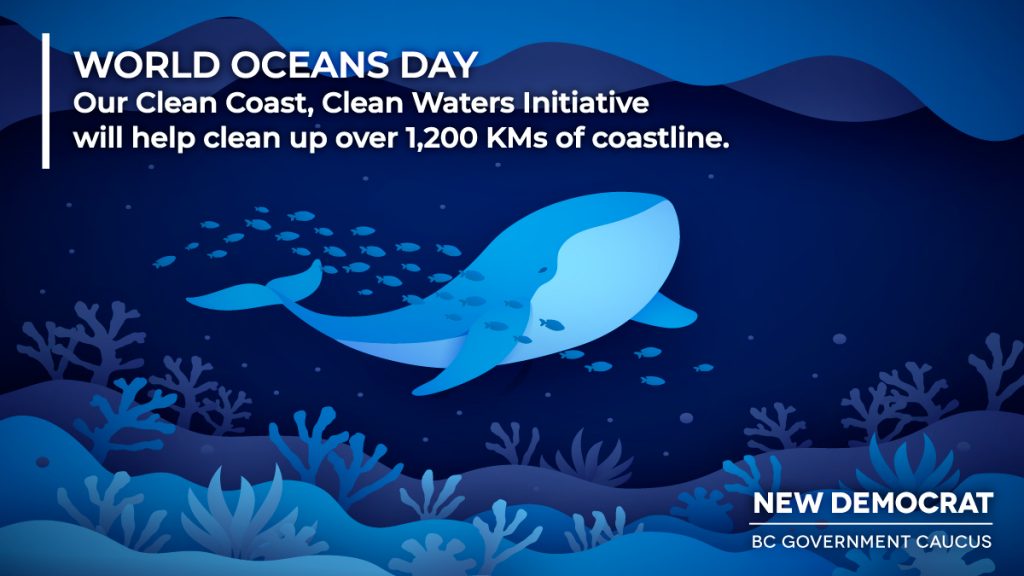 Oceans are vital to the health of the planet, covering more than 70% of Earth. They produce 50% of the planets oxygen and are home to most of the planet’s biodiversity. Oceans absorb carbon dioxide and reduce impacts from a changing climate. Oceans provide the main source of protein for more than a billion people. More than 200 million people fish for a living.

Here in BC, coastal waters are vital to our culture and our economy. Today, and everyday we celebrate those working to protect the waters, so important to all of us.

The Ocean: Life & livelihoods is the theme for World Oceans Day 2021. It’s an important theme, as many people don’t realize the critical role of oceans to life and livelihoods. Clean coastal waters keep us healthy and generate tens of thousands of B.C. jobs, as well as billions in economic activity.

As Parliamentary Secretary, I’m honoured to be working with the Minister of State for Lands and Natural Resource Operations on the development of a new provincial coastal marine strategy – in partnership with First Nations and federal and local governments – to better protect coastal habitat, while growing coastal economies.

I’m also working with the Environment Minister to step up protection of fish habitat through our biodiversity strategy a new Watershed Security Strategy & Fund.

And I’m leading work with Federal & First Nation governments to develop a Wild Salmon Recovery Strategy in BC and ensure BC processing of BC caught fish. World Oceans Day is a great time to remind each other of the role oceans have in our everyday life. And together, we will better steward the ocean and the coastal communities that rely on it.

With 80% of the worlds fish populations depleted, and 50% of coral reefs destroyed, we are taking more from the ocean than is being replenished.

More than 8 million tonnes of plastic enter our oceans annually, which equals a garbage truck load of plastic every minute.

40% of marine mammals and 44% of seabirds are affected by marine debris ingestion.

According to some estimates, by 2050 oceans may carry more plastic than fish, and 99% of seabirds may have ingested harmful plastic.

Abandoned, lost or discarded fishing gear in the oceans makes up about 10% of marine litter. This gear continues to catch fish through “ghost fishing”.

Each year, more than 250,000 marine turtles, 300,000 whales, dolphins & porpoises, and hundreds of thousands of endangered sharks are trapped and die in commercial fishing gear.

According to Dr. Rashid Sumaila, a Fisheries Economics professor at UBC,

To protect and preserve the worlds oceans we must better understand how they sustain life and livelihoods.

We must steward oceans sustainably and protect marine ecosystems.

Oceans are immensely valuable and fragile. They need to be preserved and protected through smart ocean management plans that make ‘ocean health’ a priority.

Find links to government services and answers to your questions!

Stay informed on what's happening in your community